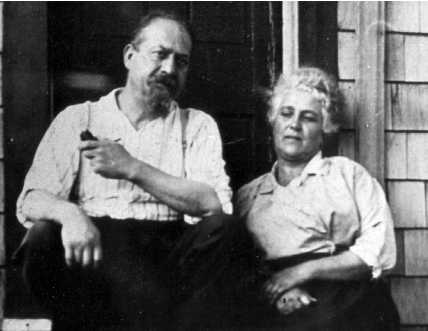 The name Luigi Galleani isn’t particularly well-known nowadays, however during the last century it was. In 1971 the American Minister of Justice named him “the most dangerous anarchist in America”. He had a large faithful following amongst Italian speaking workers both in Italy and the United States. He was an excellent orator and edited an important newspaper, “Cronanca Sovversiva”, which was described by the Minister of Justice of the United States as “the most rabid anarchist paper published in the country”. This is true, but it is also true that Galleani expressed his own ideas with huge clarity and efficacy and that he has largely contributed to anarchist philosophy. Galleani was my grandfather, from my mother’s side. My mother hasn’t talked much about him and I now regret not asking questions about him. I only started to become interested in my family history after his death. At that point I was very surprised when I discovered the amazing life my grandfather had lived.

Born in Vercelli in 1861 from a middle class family – his father was an elementary school teacher – he studied law in the University of Torino, but he never graduated. He was in fact already politically active, particularly in the area of Lunigiana. The end of the 19th century was a period of huge social tensions, marked by the creation of workers movements and a strong repression from the state. To avoid arrest, Galleani passed through France in 1880 but was soon kicked out and he sought shelter in Switzerland. When he returned to Italy in 1893 he was arrested and sent to prison for three years under the imprecise charges of “conspiring against the State”.

Once released, he was sent the Italian area of Pantelleria. Nowadays this island is a trendy holiday retreat, even Madonna has a villa there, but back in the day it was an extremely poor and isolated area. Being exiled there was the harshest punishment, a sort of civil death: those confided in that zone even called themselves “the dead people”. However Galleani was ready for this challenge, his spirit unbroken. He released an article titled “maner immota fides (“my faith remains unchanged”), which became his own motto and ultimately symbolizes the meaning of his life. In Pantelleria he meets a young widow, Maria Rallo, who had a child. They fell in love and started a family. Thus, Maria became my grandmother.

They decided to try to escape. My mother told me that her family helped find a small ship that conducted a dangerous crossing through North-Africa. They were then threatened with deportation back to Italy. Therefore in 1900 they decided to travel, through London, to New Jersey, where Galleani was invited to fill the role of editor of “La Questione Sociale”, which back in the day was the main anarchist newspaper in the United States. Shortly after his arrival he was injured by the police during a textile strike that he was leading. A contemporary noted, “I never heard a more popular orator … he possesses a marvelous facility with words, accompanied by an ability rare among tribunes: the precision and distinctness of ideas. His voice is full of warmth, his look alive and penetrating, his gestures of exceptional vigour and impeccable distinction.” .Thus, he was accused of inciting violence, however he managed to escape to Canada.

When the situation cooled down he returned to America and settled down with his family in the Canadian region of Barre, near Vemont. Barre was a suitable place for them: An area with huge radical roots that are noticeable even nowadays through local figures like Bernie Sanders. In Barre, Galleani found time to reflect and write. He became a beloved orator, established what was to become the leading anarchist periodical in America, Cronaca Sovversiva (The Chronicle of Subversion), and settled his family into a modest home on Pleasant Street. His Cronaca, with a subscription list that grew beyond 5,000, was read worldwide and was the most influential anarchist newspaper ever published in the United States. It included original contributions by Kropotkin, Bakunin, Malatesta, and other leading international theorists. During that time he already had five sons and in 1909 the youngest child was born, Mentana (“Tana”), my mother.

Three years later he transferred with his family to Wrentham, close to Boston, a city with a huge Italian community where Galleani had many followers.

In 1917 the United States entered the war and shortly after the Russian revolution started. Galleani opposed the war with the slogan “Against war, against peace, for a revolution”. A violent campaign against anarchists began that had many xenophobic and racist traits. Thus, the Italians and other immigrants that held radical ideas became their main target.

The government repeatedly tried to censor his newspaper “Cronaca”. In fact, my mother remembers the police raids in their house. They wanted to deport Galleani, but the law didn’t allow the deportation of a resident in America for more than six years or who had children born in the United States. Consequently, the State created a new law (Immigration Act e Anarchist Exclusion Act) to mitigate this.

Galleani and thousands of other anarchists and radicals who weren’t born in America were kidnapped and deported without trial during the notorious Palmer raids. My mother visited him frequently in prison, where he was being detained before his deportation. One time she brought him a chocolate bar and the police cut it into pieces to control whether there was anything hidden inside.

Returning to Italy in 1919, Galleani involved himself again in political activism. He started to publish again his newspaper “Cronaca”, however in 1922 Mussolini came into power and the newspaper was censored. In 1924 he was imprisoned and sent to another internment, this time in Lipari. He then lived in Caprigliola, in Lunigiana, constantly monitored by the police, where he died of a heart attack in 1931 at the age of 77.

When Galleani was deported, his family (Maria and six children) remained in the United States. It was a huge blow for them, even if they received a lot of help from the Italian-speaking anarchist community. Maria started working in a factory. One of the daughters left to Italy to take care of him, the eldest daughter began working in the medical profession by helping the anarchist community in Boston and had a pioneering role in the growth of the organization.

My mother stopped seeing my grandfather when she was only ten years old. She remembers this particular instance: “when my father was about to be deported my parents were fighting and my mother asked him ‘why don’t you tell them you don’t believe in anarchism anymore?’ I will never forget his reaction. Now I am happy that he lived the life he intended always believing in the cause”.

My mother was always very proud of him. She then became a communist. Even if there is often a certain degree of hostility amongst anarchists and communists, she felt that she was fighting for the same ideals. She transferred to New York, where she met my father, an Irish writer, and we and my brother where born there.

During that period (end of the 1940s), McCarthy gave a new order to start another witch hunt against any radicals. My father was included in the black list. Thus, our family left America and immigrated to London. I became a philosophy teacher, working on Mark and Hegel. I am proud of being my grandfather’s nephew and I’d like to think that I am continuing his work.

Nowadays, anarchists have the infamous reputation of being conspirators, bomb throwers or terrorists. Anarchism is viewed as a type of nihilism, a negative and destructive philosophy. Galleani’s philosophy doesn’t fit this category. Firstly, his ideas aren’t connected to any sort of secrecy or conspiracy, as he expressed his visions very clearly, without showing any fear. He was an appreciated orator and prolific writer. Similarly, anarchism isn’t merely a form of nihilism. It is a positive political philosophy with a very clear theory.

According to anarchist philosophy the State, private property and all forms of authority are harmful and unnecessary because a community that cooperates voluntarily is entirely possible. At the base of this ideology is the underlying positive faith in human nature, optimistic and idealistic, the idea that people are capable of living together harmoniously without the need for property, laws or a coercive authority. A better world is possible: this is what Galleani and his comrades believed in.

The obstacles towards the creation of such a community are private property and the State. Galleani defined himself as an anarcho-communist. Thus, like Marxist communists he supported the abolition of private property and means of production: production should never be used for profit. However he refused the more authoritarian aspects of Marxism, like the idea that a communist state is necessary to create a communist society. People are capable of living together voluntarily, without need for any force or coercion.

Galleani advocated an “anti-organizational” form of anarchism, refusing any type of hierarchy as he considered all political organizations and unions to be oppressive and coercive.

Touching on slightly more controversial aspects of Galleani’s vision: he and his colleagues supported “factual propaganda”, direct action against the state and structure of the oppressors. The political situation was extremely violent and unstable during the first years of the 20th century. Galleani and his colleagues were convinced that if they were attacked they had the legitimacy to react, they even claimed that some insurrectional acts would have been able to kick start a spontaneous revolutionary uprising by the workers.

In 1905 he published a brief pamphlet, named “The Health is Within You”,  advertised in the pages of the Cronaca as “an indispensable pamphlet for those comrades who love self-instruction”. However this pamphlet was, in actuality, an Italian language manual for the manufacture of dynamite and other weapons to be used in the upcoming class war. In 1919 there were a series of bombings. It should be noted that contrary to current terrorism, those terrorist acts did not target any civilians. The targets were picked with great care and were capitalistic institutions like Wall Street, big businessmen (Rockefeller, J P Morgan) and government officials responsible for leading a war against their workers, such as Attorney General Palmer. The FBI desperately tried to prove that Galleani’s group were responsible for these attacks (it is unlikely that Galleani was involved). They failed to find any evidence, however many members of Galleani’s group were suspected of terrorism. These were violent times and we must remember that the main perpetrators of violence were the police and the State. What happened to Galleani also happened to thousands of other radical activists: they were attacked, arrested and deported without trial. Many decided to resist and fight back, and Galleani was one of these people. This is why Galleani was labelled as “the most dangerous anarchist of America”. I am certain that he would have been proud of this label.

Published in Italian anarchist newspaper Umanità Nova, translated into Italian by A. Soto.

Translated from the Italian version by Pietro Casati